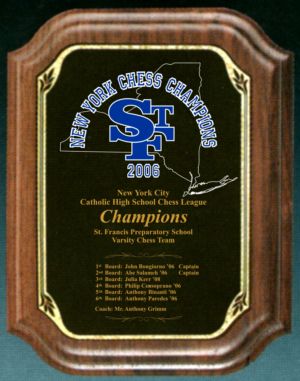 is the Winner of the

The team has won

The first two were

in the "B" Division;

were in the "A" Division. 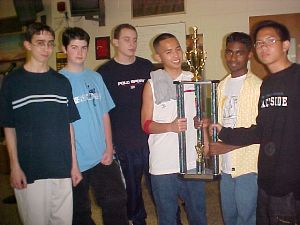 (Pictured above is the first "A" Division Chess Champion Team.

Those who do not make the team

but wish to compete in the

league and in various tournaments

can improve their play

Chess Club is also open to those

who wish to enjoy the game of chess

without the competitive nature of the

The game of chess seems to have left a part of American culture dumbfounded. The question "is it a sport or a board game?" often arises. While it may not be as physical as football, chess is an intellectually demanding game that depends on abstract reasoning and strategic thinking. Whether one argues that chess is a sport or not, one thing is for sure. St. Francis Prep's Chess Team, from Queens New York,  is a group of strong players that have devastated opponents in their league.

During the last five years, the Prep has dominated the New York City Catholic High School Chess League (NYCCHSCL). In 2000 and 2001, they won the Varsity "B" championships, and in 2002, 2003 and, once again this year in 2004, won the Varsity "A" title.  Last year (2002-2003), with Doug Pham as captain, and this year (2003-2004) with Greg Giusti as captain, the Varsity team finished with a brilliant record of 15-1. Last year, their only loss came in a three-hour match against St. Raymond's from the Bronx and this year against Molloy from Queens.

Last year, in addition to winning the City Championship, individual Varsity players won five of six board trophies -- awards given to the best players in the league at their respective positions.  This year St. Francis Prep won each board trophy!  Three years ago, the NYCCHSCL created a Junior Varsity level.  St. Francis’ JV team has won the City title each year:  three in all.  In the first two years of its existence, Prep's JV team crushed Molloy in the finals.  This year the Prep’s JV team defeated the team from Regis High School from Manhattan.  Last year and this year the JV team was undefeated!

So how do they do it? What makes the Terriers nearly invincible in their league? "There are a number of reasons why the team has experienced so much success," said Mr. Grimm, who has been the coach for the past six years. "The team exhibits the necessary qualities all great teams require: camaraderie, hard work, commitment, sacrifice, etcetera.  Depth is one of the team's greatest strengths. This league has never seen a varsity team whose rating average is over 1500," explained Mr. Grimm.  ...