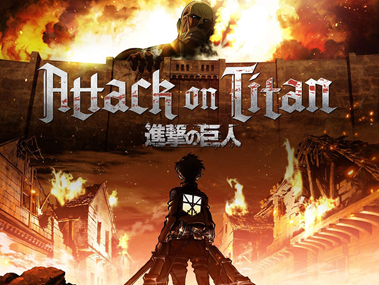 The remains of humanity. Confined within three walls. Living in austerity and in fear for their lives. The remaining humans can thank the walls for years of safety from the giant humanoid looking titans who feast on humans for no good reason at all. Three friends: Eren Jaeger, Mikasa Ackerman, and Armin Artlet all plan to explore outside the walls and find the ocean they dream of laying eyes on. They long for freedom from the fear and confinement the ghastly titans inflict on humanity. After years of peace, a colossal titan, one taller than the fifty meter tall wall, leans over the wall and kicks it open. The wall which once protected humanity from the treacherous outside world was now breached and numerous Titans began to infiltrate, eating every human in sight. Eren and his friends experience the pain of losing their home, friends, and family. Is their dream now a pipe dream? Will humanity ever be able to fight back and overcome the Titans? Is freedom plausible?

Attack on Titan is a modern day masterpiece which demonstrates both the world’s flaws and its beauty. From corruption and betrayal to natural beauty and love, Attack on Titan brings more than just a simple story to the table. It explores the political, social, and economic themes that have been present in mankind’s history. It branches out into a complex story that is decorated by the epic soundtracks that touch your soul and launch you into the story right with the characters. The anime/manga series consists of 4 seasons and over 30 volumes. The series concludes this year, 2021. Every Sunday, a new episode of the final season (season 4) airs. Each and every episode or chapter grasps your full attention and leaves you eagerly waiting for the next. Its unpredictability with plot twists and ability to manipulate the way you think creates a feeling of unexplainable excitement. Attack on Titan has become the most popular show in the United States, even though it is produced in Japan. It breaks all kinds of records, surpassing two of the greatest rated tv-series of all time, Breaking Bad and Game of Thrones. Attack on Titan has had more than seven episodes with a rating of 9.9 or greater on IMDB. Combining the same episode ratings for both Breaking Bad and Game of Thrones still does not amount to the seven achieved by Attack on Titan, solidifying the series’ extraordinary success. I personally love Attack on Titan and the way it relates to the real world. It appeals to all ages and opens your eyes to many shocking truths you probably haven’t realized about the world.

My Experience Getting the COVID-19 Vaccine

Nutrition and Your Health

Coming Soon in the Marvel Universe

The Extent Of Freedoms Through Virtual Learning